About us
Our company

Working from our showroom in the heart of the New Forest, we have been supplying the very best wood burning and multifuel stoves for the last thirty six years. We can offer a wealth of knowledge which comes from long experience.

We’re not interested in high-pressure sales, or pushing only profitable lines. Instead, we have always been in the business of providing“Warmth for the wise”, and if you’ve come to us, it’s our attitude that the stoves will sell themselves. Our aim is to give you good advice, tailored to your specific requirements, to steer you on your way to many, many years of safe, warm and happy stove use.

If you are interested in having a wood burning or multifuel stove installed, we recommend that you come to the showroom with your ideas, a photo or two and some dimensions. Have a chat with us about what you're hoping to achieve, take a look at which types of stove might be appropriate for your installation, and then, if the project looks feasible on paper, we will send one of our recommended installers out to make a detailed assessment and discuss the details on site.

Our new showroom is situated in Lymington in the heart of the New Forest, just a short distance from the M27. We are currently in the process of setting up; work is scheduled to be completed later this summer. We stock a huge selection of multifuel and wood burning stoves, ranges, fires and accessories so you can get a really good idea of how our products work.

We can help you to choose not just your perfect wood burning stove, but also beams, hearth materials and all the accessories you are likely to need. We also keep large stocks of rigid fluepipe, flexible flue liners, twinwall insulated flues and fireplace materials, as well as replacement parts for our most popular stoves.

Whatever your needs, we can promise you a warm welcome and good advice!

The New Forest Woodburning Centre was launched in 1978 by passionate woodburners, and advocates of self-sufficiency, Peregrine and Fiona Bruce, who still run the business today.

Starting on a shoestring budget, the Bruces initially sold Norwegian, Belgian and Danish wood burning stoves from their garage. The global energy crisis, coupled with the decimation of the UK’s tree population by Dutch Elm disease, proved fertile ground for the nascent British market in stoves. The company quickly outgrew the garage, and moved into an old coach house adjacent to Brockenhurst train station and then to a converted Victorian schoolhouse in Sway.

British companies soon started to design and manufacture 'home-grown' stoves, and a revolution in efficient stove design was pioneered by Clearview Stoves. This transformed the market, and ushered in an era of highly efficient and clean wood-burning appliances which could now be legally installed within “smokeless” areas. Whereas the early adopters of wood burning had largely been those living in the countryside on smallholdings, farms and estates, stoves were now increasingly being installed in suburban, town and even city homes.

Since its inception, the business has gone from strength to strength, moving to its current spacious address in Lymington in April, yet the company ethos remains exactly the same. With our motto, “Warmth for the Wise”, the company has always been about more than simply selling stoves – it is about fostering sustainable self-reliance and harmony with the environment, a philosophy thoroughly in tune with modern times.

Today, the company’s recommended installers fit hundreds of our stoves each year, as well as lining existing - and building new - chimneys, laying hearths, and constructing fireplaces, all in full compliance with the raft of regulation that has grown up about the industry.

In this age of high energy prices, fuel scarcity and concern about our fragile environment, our mission has never been more relevant.

Our location
How to find us

Our fabulous showroom, crammed with wood burning stoves and essential fireside kit, is situated in Lymington in the heart of the beautiful New Forest. We are a short hop from Junction 1 of the M27, and easily accessed from the Southampton or Bournemouth areas. With all the natural amenities of the New Forest on our doorstep, not to mention all the popular tourist attractions of Lymington, why not make a whole day out of your visit to us?

We are open for business six days a week, with all our favourite stoves on display, so please don't hesitate to call in... 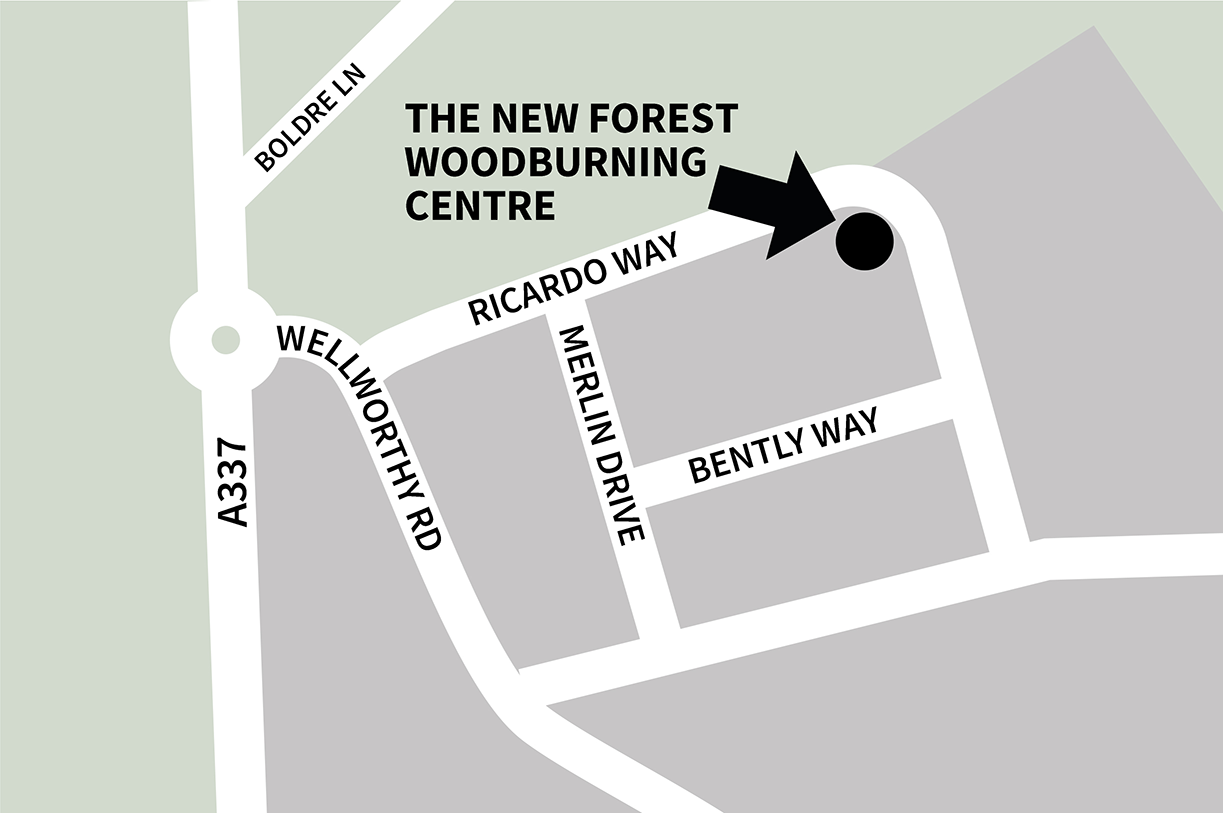