A philosophy of disaster planning; the place of the wood burning stove in your survival tool set

I’m always slightly surprised when people scoff at being told that an ancillary benefit of buying a Clearview stove is that you can boil a kettle on top of it, as if to say they can’t ever imagine a circumstance where that might be useful. 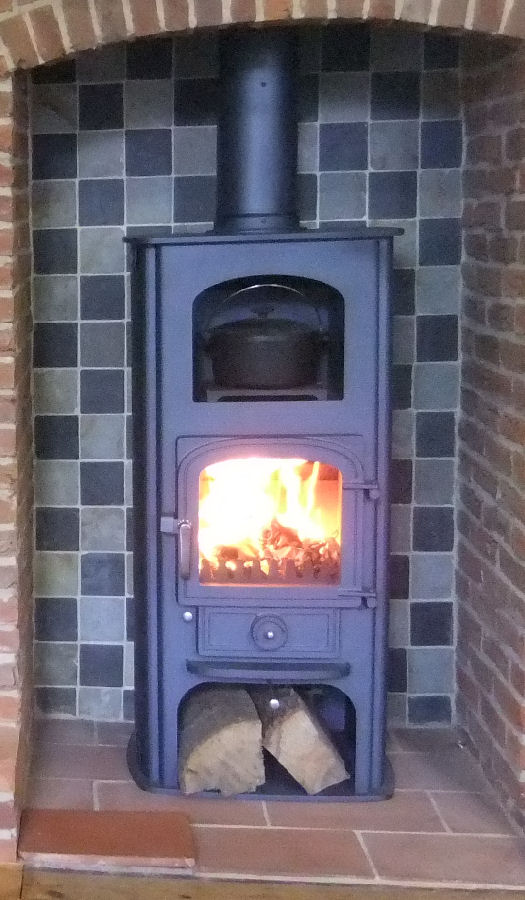 At the end of December 1999, I was living in France when a great storm blew in from the Atlantic the day after Christmas. I find that the event is so imprinted on the French psyche that the mere mention of the generic word ‘tempete’ will automatically bring that particular storm to mind for any French person who was living there at the time. Winds blew at up to 259 km per hour. There was an estimated 19 billion dollars of damage, huge masses of French forests were destroyed, people woke in the night to find themselves looking up at the stars because their roofs had blown off. The event was a national trauma, causing many deaths and widespread destruction, but not least because it shook people’s abiding faith in the ability of the state to cope with disaster. The storm left 3.45 million families and individuals without electricity. It took 19 days to restore electricity nationwide.

We became aware of the building storm in the late afternoon. Just before dusk, we closed all the shutters - from outside the house to avoid opening windows - then we waited. The storm blew all night. From outside, there were great cracks and terrifying groans interspersed in the constant howl. We huddled inside, blind and anxious.

The winds eased off with dawn. We had come through relatively unscathed, living in the lee of a hill to our west. We lost one thirty-metre fir tree which fell away from the house, its broad but shallow roots levered from the earth and fanning high into the air. Had the wind been blowing the other way, the tree could have collapsed our roof and crushed us in our beds.

The electricity had gone overnight; the phone continued to work for a merciful few hours before that too cut out (these were the days before the phone system went fully digital; nowadays communications would have failed along with the electric grid), enabling us to check that our previous and fortuitous booking for a New Year overnight stay in the Pyrenees was still possible, the Pyrenees-Atlantiques having miraculously escaped the wrath of the storm.

However, that was the best part of a week away, which gave us plenty of opportunity to experience medieval living conditions.

A cold front followed the storm in and temperatures plummeted.

Nothing worked. There were no lights visible anywhere, no phones. Freezers and refrigerator units failed. There were no food deliveries. Shop shelves emptied. Petrol pumps didn’t work. There was no phone, no central heating. People with gas tanks found that the electric safety cut-out prevented them being able to cook.

Community spirit was robust. Those who had generators toured the village, trying to keep everyone’s freezer cold (the French invest heavily in frozen food). Burly men with chainsaws cleared roads. Crucially, some bread - that utterly totemic French staple – continued to be available in the boulangerie, and the mains water supply never stopped. This being France, the pharmacist continued to ply his trade and the hairdresser gamely stayed open for business.

The longer it went on, though, and the scarcer resources became, the more brittle grew the veneer of civilisation, by the calculus that sees kinship ties reactively exert their exclusionary influence. It reminded me of that brutally clear-eyed, gloriously Hobbesian Somali aphorism, ‘Me against my brother, me and my brother against my cousins, me and my cousins against the world.’ Even in a people as highly evolved towards cooperation as the French, the cracks started appearing after a few days without light, heat or comfort.

We walked everywhere, keen to conserve petrol. We cooked on bottled gas, and bathed our six-month old in a candle-lit wash basin. We heated ourselves with firewood and went to bed shortly after dark. After the storm itself had passed, we never felt in any danger, but there’s a certain type of misery that comes of being compressed into discomfort and inaction by unforgiving elements. We didn’t have a stove then; it would have made an enormous difference to our experience.

On New Year’s Eve, we drove south, with no real sense of the national scale of the problem. We saw our first electric light just before Bordeaux, an hour and a half to the south, which brought tears to the eye. We ended up staying nearly a week in the Pyrenees, waiting there until our neighbour confirmed (by phone) that the electricity was back on, nearly two weeks after the storm had passed through.

Experiences of this kind prompt your mind to think about risk in a slightly more rational way. The storm was like a ‘black swan’, to borrow Nassim Taleb’s terminology. Nobody was ready for it, because the risk of it happening had been statistically minimal. An analogy Taleb uses in his book ‘The Black Swan’ is the turkey who is reared for Thanksgiving. Based on his experience of 1000 days of regular feeding, the day of Thanksgiving should be no different, but nothing in those1000 days can prepare him for his bloody denouement.

The two factors involved in assessing risks are understanding the likelihood of an event occurring, and realistically assessing its impact on us. If the typical ritual of Thanksgiving was to share a kiss under a turkey tail feather, then there would be no meaningful advantage for the turkey in anticipating the event, however momentarily uncomfortable the extraction might be. Being primed for slaughter, however, is a good incentive to flee the safety of the farm and take your chances with the foxes.

Humans, especially in our hyper-rationalistic society, are not good at assessing risk. Blanketed by CCTV and state and corporate surveillance, saturated in sensationalistic media coverage and the self-serving agendas of egotistical politicians, we allow Health and Safety to circumscribe even the most innocuous of our activities and live in terror of statistically insignificant terrorists and deviants and incredibly complex geo-stratospheric phenomena that nobody but a handful of people can truly claim to understand (and most of them are probably wrong), yet drive cars at high speeds and let our children cycle on the same dangerous roads, play rugby, queue to trudge up Everest, expose our personal information on social networking sites and entrust for-profit utility companies with ensuring our well-being and security.

There is a lemming-like wilfulness to our risk myopia, as if there is safety in numbers. This is probably a hangover of human history in which culture impregnated individuals with a general and unconscious awareness of the real risks they were likely to face and mimicking the crowd was a healthy survival strategy. In our technologistic society, however, our perceptions are skewed and our analytical skills have prospered at the expense of our holistic intelligence and ability to comprehend the interconnectedness of things.  We no longer enjoy the evolutionary advantages of our forebears, and we should be more careful.

As Jared Diamond has pointed out, for elderly people especially, the greatest quotidian risk with the gravest long-term consequences, is probably getting in and out of the shower, yet how many of us really take care to consider this and do it safely?

The chances of power failures or other threats to our infrastructure, however, are real, with the consequences expanding with every mutation in the interdependence of the everyday systems on which we rely. We are vulnerable to freak weather events, to computer glitches, viruses and other attacks, whether malicious or not, to power failures and power shortages due to insufficient capacity, electro-magnetic pulses and solar flares. The fact that we have become so unused to power cuts and logistical disruptions only makes the situation worse. Our intolerance of any kind of systemic failure is shown by the hysterical reaction to the recent glitches in RBS’ computer systems which meant that people were deprived of banking services for a few hours! The taller you are, the harder you fall.

So many of our services are now massively interdependent. Gas, water and electricity supplies, food distribution systems, phones, banking, the internet, petrol pumps, burglar alarms, CCTV, even domestic gates and stairlifts, television and digital radio, all are vulnerable to even the smallest disruption and most are installed or implemented with only the most sketchy of contingency plans. As a result, risk becomes ever more concentrated and ‘security’ increasingly means protection against threats rather than diffusing risk through developing fail-safe options. This brand of ‘security’ thus becomes absolutely paramount, costing billions (not to mention the crippling cost of societal paranoia), and the fixes for glitches and vulnerabilities to the system tend to add ever greater layers of complexity, when what we need to do is to scale back on complexity, perhaps at the risk of making ourselves more vulnerable, and to build in coping strategies, to try to create what Taleb calls ‘anti-fragility’.

Whether or not this can succeed on a societal level is, perhaps, a moot point. As Joseph Tainter observed in his 1988 treatise ‘The Collapse of Complex Societies’, highly-evolved societies do not collapse despite their technical complexity but because of it; they are simply not capable to adapting to simpler ways of doing things.

On a personal level, there is no such excuse for prevarication. This is not to say we should be panicked into going to full survivalist extremes, cramming nuclear bunkers full of guns, ammunition and five years’ worth of condensed milk and Twinkie bars. History is littered with the detritus of millenarian cults that got their timing wrong (although every so often someone like Moses will hit the jackpot and lay claim to a whole new stream of moral righteousness).

But it is worth planning, with a weather eye, for contingencies that will inevitably happen at some point and could have a huge impact.

Many of the ways of being prepared are modest and simple, and fit easily into a normal sustainable lifestyle with just a few tweaks. Owning a wood burning stove is one of the easiest. Stoves fit easily into our architectural rubric and domestic culture – humans have always liked to gather around fire - and the reasons for having one are hardly esoteric. They warm houses in an extremely healthy and pleasurable way; their apocalypse-busting qualities are almost coincidental.

If you have  a wood burning stove, you should also have a few months’ worth of fuel piled up in your garden, giving you a huge head start in self-sufficiency. Heat comes high up Maslow’s hierarchy of needs, and apart from sunshine, there is no better source of heat than a wood burning stove. They also provide light and a focal point, which, on gloomy, powerless nights is not something to be sniffed at. Furthermore, if you pick a stove you can cook and boil a kettle on, all the better. My top pick would be a Clearview Pioneer Oven.

It is easy to see how a wood burning stove could make all the difference in an emergency. When the alternative might be being crammed with hundreds of other refugees into a cold smelly community centre with sleeping bags and overflowing toilets, who would choose not to sit out the time cosily around a glowing fire in their own home?

You say Apocalypse? I say, ‘Another baked potato?’