If you've got a wood burner, don't worry, we're not running out of wood

If you think you’ve noticed the price of logs creeping up, you’re not alone. Demand has been pushing prices up, and not only because of the runaway popularity of wood burning stoves in recent years (more on this below).

However, the long term price of logs does remain fairly consistent and there are a number of reasons why this is likely to continue.

The first bit of good news is that log prices are increasing considerably more slowly than those for fossil fuels or electricity, and that, as ever, there’s nothing to stop you buying wood when, and in the condition, you want, rather than paying for it at the point of use.

The next bit of good news is that unlike finite fossil fuels and feedstock for electricity generation, wood is becoming more and more available. Not only is woodland coverage increasing, but increased demand and tax incentives have motivated owners of managed forests to bring more firewood to market. Managed woodland is still greatly under-exploited in the UK, and there is scope to increase the ‘harvest’ by millions of tons even before any increase in forest coverage.

And forest size is increasing. Although you might not believe it from the doom-and-gloom brigade in the media, tree coverage worldwide is actually at a flux point, even with the continuing wholesale massacre of forest in Brazil and Indonesia, from which it might actually start to increase. In fact, if you strip out tree loss in those two countries, global forests actually grew by 2% since 1990.

In England tree coverage increased by a massive 17% between 1980 and 1998 to about 8.5% of the country by area. By 2010, the Telegraph, citing a UN report, was suggesting that coverage had reached 11.8%. Although risible by European forestry levels, which reach almost 80% in countries like Finland, Britain is well on its way back towards the level of 15% that was recorded in the Domesday Book. Given that just before the end of the 19th Century coverage had dipped below 5%, this is no mean achievement. 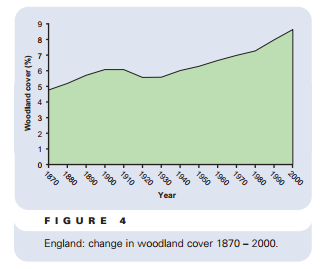 Hampshire, Sussex and Surrey are the greenest counties of all by this metric, and in the New Forest, created at the behest of William the Conqueror, we certainly have no shortage of trees.

At least part of the explanation for the increase lies in our attitude to trees and our understanding of ecology. In the past, trees have been thought of as an impediment to agriculture, and as an asset only insofar as they provide timber. After the Napoleonic Wars, when enhanced demand for warships led to the felling of thousands of trees, there was no incentive to plant trees and tree populations withered, especially after the industrial revolution and the advent of cheap coal, which displaced firewood as the domestic fuel of choice.

In the 21st Century, not only has the crucial role of trees in regulating climate and flood waters, retaining soil and absorbing pollution started to be appreciated, but the amenity value of forests and the huge contribution of green spaces to physical and mental well-being has also been recognised. At the same time, wood has enjoyed a resurgence in popularity as a sustainable construction and floor material, and as a carbon-neutral fuel.

The electorate is impassioned about saving our old forests, and is increasingly aware of the importance of creating and maintaining tree cover in both countryside and urban areas. The Woodland Trust is driving large-scale planting, with biodiversity at the heart of the scheme. Massive conifer plantations have fallen out of favour, with broadleaves now accounting for a far greater proportion of trees than evergreens. Government policy is geared towards maintaining existing forests and steadily increasing woodland cover. Although the area of Forestry Commission-managed woodland has not decreased, the majority of woodland and nearly all the new woodland is in private ownership. 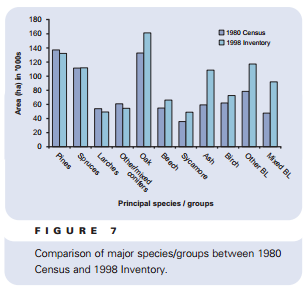 All of this suggests that prices for wood as a fuel should remain relatively stable, as in a free market with few constraints on production, supply will expand to fulfil demand. The main threats to this healthy free market, as usual, are from misguided government regulation and perverse government incentives.

The first takes the form of a general insidious trend to regulate the woodfuel industry, by which the government can then tax logs and enjoy a new source of revenue. The second, and more serious, is the propagation of insane schemes for power generation through burning wood, which the government are sponsoring in a desperate attempt to meet their carbon emission targets. These schemes are actually deeply damaging to the environment, but have been seized upon by the trough-feeders in the City because of the enormous subsidies involved, and threaten to totally up-end the wood fuel market. As a result, wood-burning plants are popping up all over the place and vacuuming up wood that traditionally would have ended up in stoves.

If nothing is done to stop it, a tipping point may be reached at some stage where so much money has been invested in, and so many jobs will depend upon, this ridiculous scheme, that no government will have the will to pull the plug on the gravy train. Fortunately, there is widespread opposition to the burning of word for power and at some point the Canute-like perversity of continuing with it will hopefully ensure its demise.

In the meantime, forests and the supply of wood should continue to expand, giving us a more beautiful country and warmer, happier homes.