No chimney, no problem, some further thoughts...

The installation of a twinwall flue system allows you a great deal of latitude to place your wood burning stove where you want it, but there are other considerations to take into account, not least whether to build the flue inside or outside the walls of your house.

If the stove is not positioned on or near an outside wall, the flue will have to rise inside the building and exit through the roof. In the first instance, there must be a clear passage between floor and roof timbers – certainly at least 12 inches, often more. Sometimes inconvenient joists or rafters can be trimmed to allow passage, but structural timbers must always be circumvented – for example, the flue cannot rise through the apex of a pitched roof - but normally a pair of bends can be fitted to allow it to emerge to one side or the other.

In a bungalow or other single-storey dwelling, this is usually fairly simple to achieve. There is an added layer of complexity when the dwelling has two or more storeys, but is usually a question of small compromises rather than insurmountable problems. 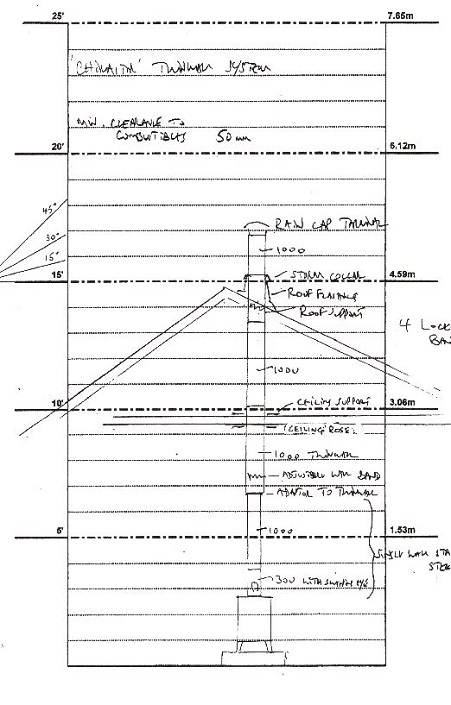 The main advantages of an internal flue system are that firstly, the flue can often be kept dead-straight, or at least make minimal use of off-sets, and secondly, the flue is relatively warm, even when the stove is not in use, simply by virtue of being within the curtilage of your four walls. This makes lighting easier, as there is less cold air to displace before the flue starts to draw, and reduces the risk of flue gases dropping below the dew point and condensing before they can exit into clear air.

The potential downside is mostly one of convenience; if the flue has to pass through upstairs rooms, it needs to be safely boxed in (and ventilated), and unless it passes through a convenient cupboard, or the eaves of a dormer, can eat into the useable floor-space of a bedroom.

If the stove is installed on an outside wall, it is usually an option to run the flue up the outside wall of the building. While the cost of the flue components is roughly commensurate with an internal system – the cost of the extra bends, sleeves and T-piece only slightly superseding the cost of the flashing and roof fixings - the respective labour cost tends to run steeper, as the installation will almost always extend to an extra day because of the messy work of opening a large enough hole in the wall and then patching it up again afterwards. 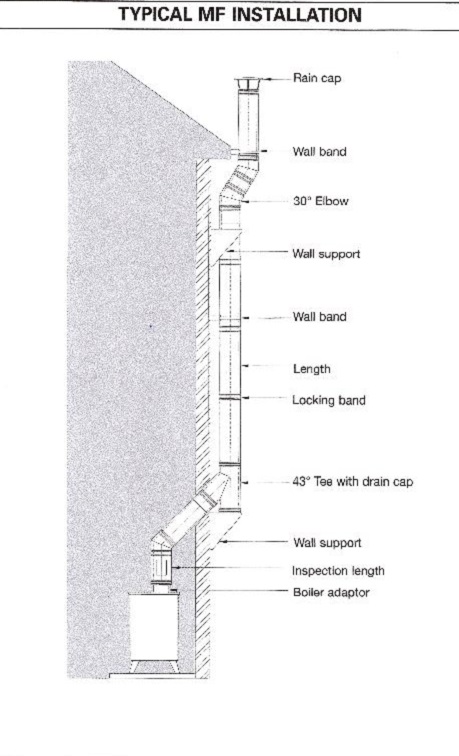 On the upside, an external flue system can help create a less utilitarian aspect in the room where the stove is situated, and saves the inconvenience of having to bypass timbers and negotiate upstairs living space. It also allows the flue to be mostly swept from outside, and for rainwater that enters the flue to drain outside too.

On the downside, external flues change the silhouette of a building and can lend an industrial ‘je-ne-sais-quoi’ to its appearance, though, in truth, they are often no more obtrusive than gutter downpipes. The main disadvantages are the inevitable introduction of bends into a product that works best when it is straight, and that the ambient temperature in which the flue operates will always be colder than with an internal system: you may have to be more artful in lighting your stove, make it work a little harder, and sweep the flue more regularly.

All that being said, external flue systems are happily deployed in climates much cooler than the UK, and remain an excellent and cost-effective solution for houses without chimneys.

For our overview of twinwall flue installations and building false chimney breasts, see our original 'No Chimney, No Problem' article.

If you're wondering which kind of stove will work best with your twinwall flue, click here.