Opening up fireplaces - what is possible?

If you are thinking of installing a stove in your fireplace, but it seems a little small, or has been closed off, you may be able to have it opened up and made wider and taller. Here are some tips for getting an idea of what might be possible:

There will normally be a chimney breast of some sort. This may protrude into the room, or it may be built out of the external wall of the property.

Depending on the age of the property and the construction method of the fireplace, there may or may not be scope for opening up.

If the chimney breast is internal to the property, and is constructed of brick, a useful rule of thumb is that it should be possible to enlarge it to the full width of the chimney breast less the length of two bricks, and the attendant plaster on the outside return and any eventual render or boarded finish on the inside returns (one full brick on either pier is generally required as a minimum to tooth in a lintel into the brickwork). In effect, this usually means deducting about twenty inches from the width of the chimney breast for a realistic maximum opening width

If the chimney breast is external – i.e. on the outside of the house – a similar exercise can be carried out, but it may well be the case, especially on more recent construction, that the cavity wall of the property wraps around the chimney breast too. This significantly curtails the achievable width, as you will need to discount the width of two courses of brick per side, plus the width of the cavity.

The cavity wall on some older properties does not always envelop the external chimney breast. We have found this to be especially prevalent on many detached properties in Bournemouth where the houses have been built close together, and the builders, to achieve the maximum economy of space, and thus preserve access between buildings, built the chimneys with a single skin of bricks. In this instance, the chimney breast can often be opened up to a much greater extent.

One feature commonly found on internal chimney breasts, usually where a back boiler was built into the original fireplace, is a hollow section built into one cheek of the fireplace, which was originally intended as a conduit for pipework. While this does not preclude opening up the fireplace, it frequently involves a more substantial rebuild, as the reveal needs to be removed and replaced with a solid brick pier while the rest of the chimney is structurally supported to prevent it collapsing.

Sometimes, a substantial original fireplace is simply concealed by a later ornate addition. Frequently, this will be a Victorian cast-iron fireplace with inset tiles, and a tiny fireplace mouth. Removing the ornate surround – usually in one piece, as this is the way they were constructed – will then reveal the original fireplace, which is likely to require some decorative restoration. To get an idea of whether this is the case, get down on your hands and knees and shine a torch into the opening and peer inside and up.

Alternatively, many older fireplaces were bricked in subsequently to reduce the opening size, and so reduce heat loss from the house. Often, this was done in conjunction with the addition of a Milner-type fireback, pre-cast components that severely reduced the size of this new fireplace, with a throat to force the flames forward and maximise the heat delivered to the room. Firebacks can be easily removed, and often a bricked-in fireplace can usually be restored to its original dimensions, although it is normally so covered in mortar, and the brickwork dented, that it cannot be fully restored and requires plastering for a good decorative finish.

Looking inside the fireplace with a torch also gives you a chance to gauge the size of the flue. In the old days, flues were constructed of bricks, and so typically followed the arithmetic dictated by the material. So depending on how the brickwork was laid, you might have ended up with a 9 x 9” brick flue, or 9 x 13.5”, or 13.5 x 13.5” etc.

More modern chimneys might have been built using lining materials, usually round, but sometimes square concrete. Typically, the builders would have used the cheapest material – clay liners – and, in our experience, installed them, in about 50% of cases, upside-down, because of a misunderstanding of the logic of their intended use. These kind of liners can vary in diameter, but are often 6” or 7”. This can be significant, as they may make it difficult to get a flexible liner down inside, which will almost certainly be required for a stove. Adding another layer of complication, it is usually not possible to see all the way up the chimney and you are thus at the mercy of the quality and integrity of the original build. Sometimes the liners were badly put together, broken to achieve bends and/or were assembled with great snots of mortar bulging out of the inside joins. The net effect is to reduce the diameter at points in the chimney and make life difficult for your stove installer, who may, on encountering these issues while trying to thread a liner down the cavity, emit some strong language. But that’s later on, and doesn’t concern us here.

Modern fireplaces, and especially those of 80s-vintage, are often purpose-built using pre-formed concrete components, typically a gather unit which forms an inverted funnel as well as functioning as the fireplace lintel, with the supporting structure assembled from concrete blocks. Because of the dimension of concrete blocks, which make them a poor modular material (imagine if all Lego bricks were eight-dot by two-dot, and you get the idea), this makes it very difficult to adapt the fireplace without a complete re-build. In this case, you would be best off installing an inset stove, many of which are constructed precisely to fit into such a standardised builder’s opening.

The other option in this scenario, more attractive when the room is huge and there is space to spare, is to close up the fireplace completely, position a free-standing stove on a large hearth in front of it and then flue the stove through the wall higher up into the existing chimney.

An extreme option, where opening up is not possible, may be to knock out the back wall of the house to create (or extend, as in the picture below, courtesy of Wayne Stride) a fireplace/chimney breast. This requires digging footings outside and then re-building the cavity wall around the new fireplace. While this achieves the desired outcome, to the dimensions of your choice, it is not to be undertaken lightly, and will certainly be both messy and costly. 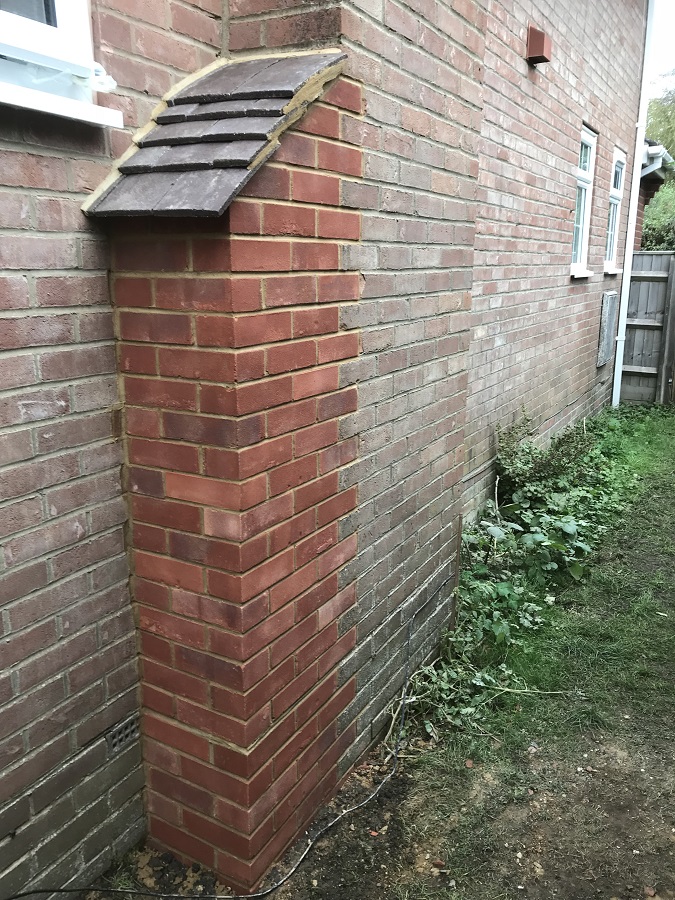 Even with a fairly simple knock-out, be prepared for a substantial quantity of resulting rubble. It is surprising how much comes out of a chimney breast, and the resulting detritus may require a skip or several rubble bags.

Assuming the pre-conditions allow for opening up your fireplace, there are still many considerations to take into account to achieve your desired outcome. It is also structural work, subject to building control, that could result in severe damage to your building, if done badly, as well as possible injury, so make sure that any work is undertaken by a suitably qualified builder, and ideally, by a specialist in fireplaces and stoves who can advise on the specific ramifications and requirements.