Cooking with our Potato Cooker range on a wood-burning stove 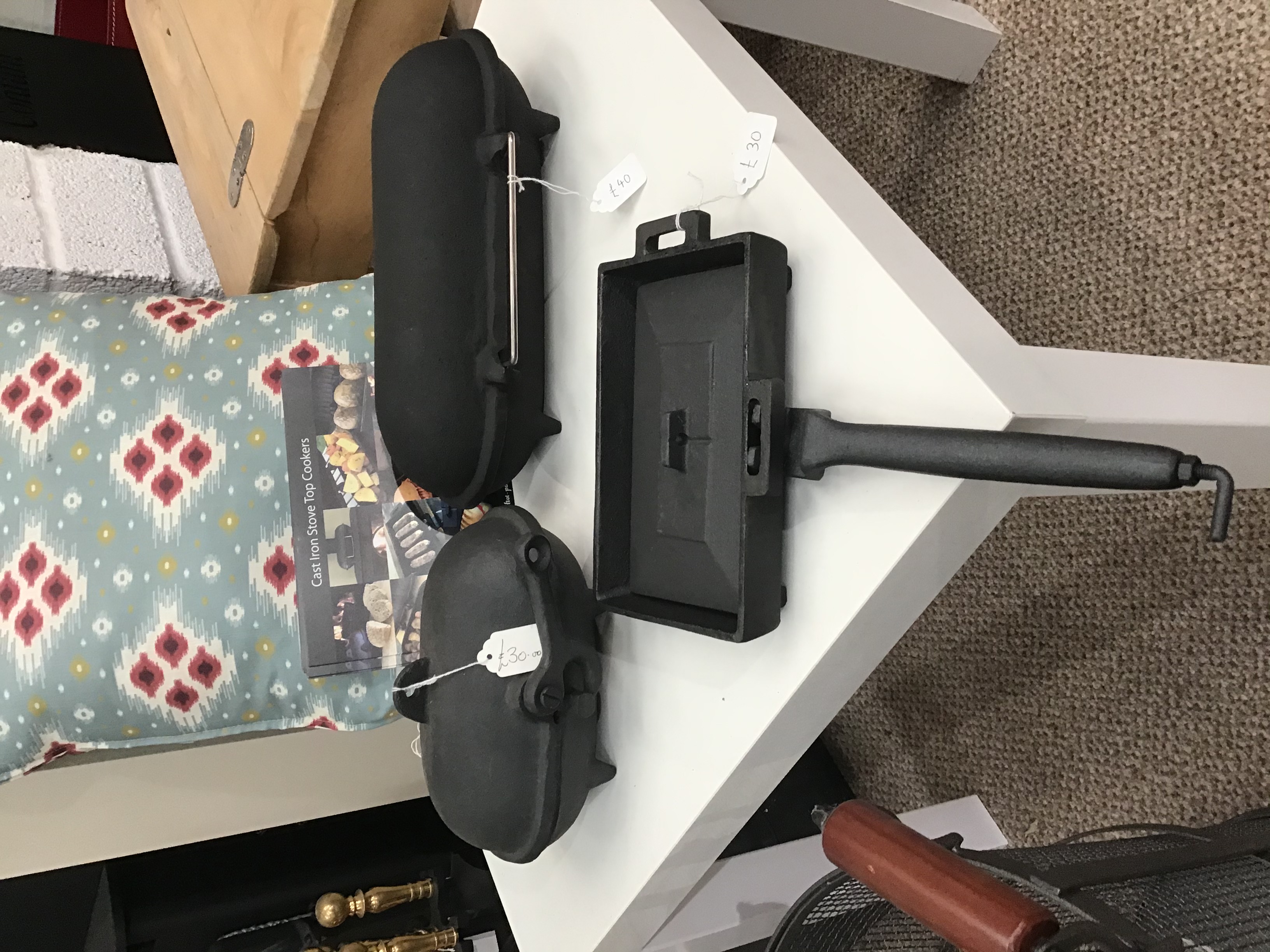 The intensity of heat from a wood burning stove makes it ideal for some kinds of cooking, and our friends who make the extremely popular Potato Cooker range have come up with some ingenious cast-iron cookware for facilitating efficient, tasty and mess-free methods of creating some staple favourites using your stove. 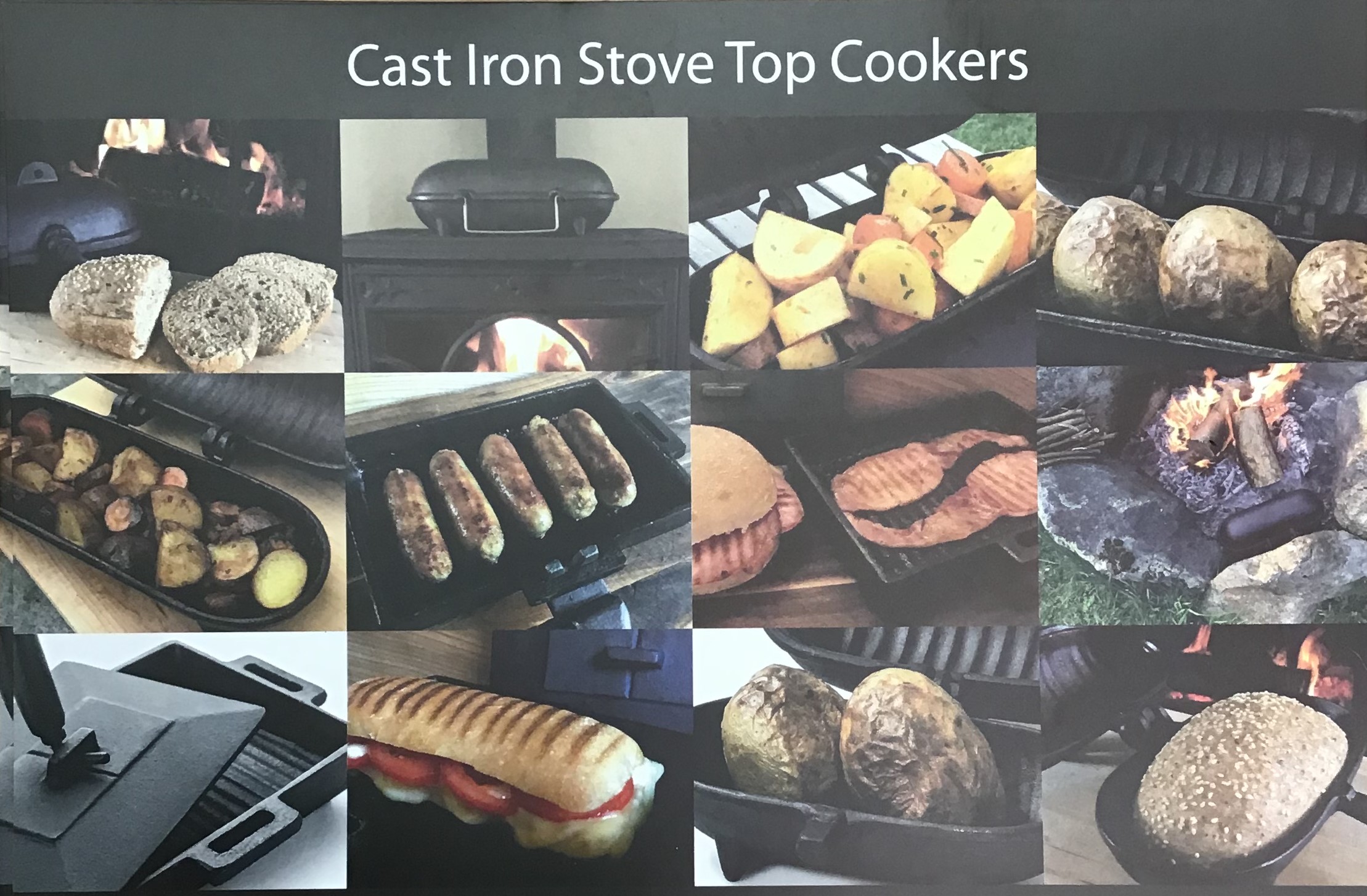 The only proviso is that in general you will need a stove-top that can boil a kettle; convection-type stoves generally do not get hot enough to cook on, unless you cook inside them - more on that later...

There are three products in the Potato Cooker range: a small and large potato cooker and a panini press, but their uses are considerably more versatile than the names suggest. All are designed for stove-top use.

The primary intended purpose of the potato cookers - no surprises here - is to bake delicious potatoes. 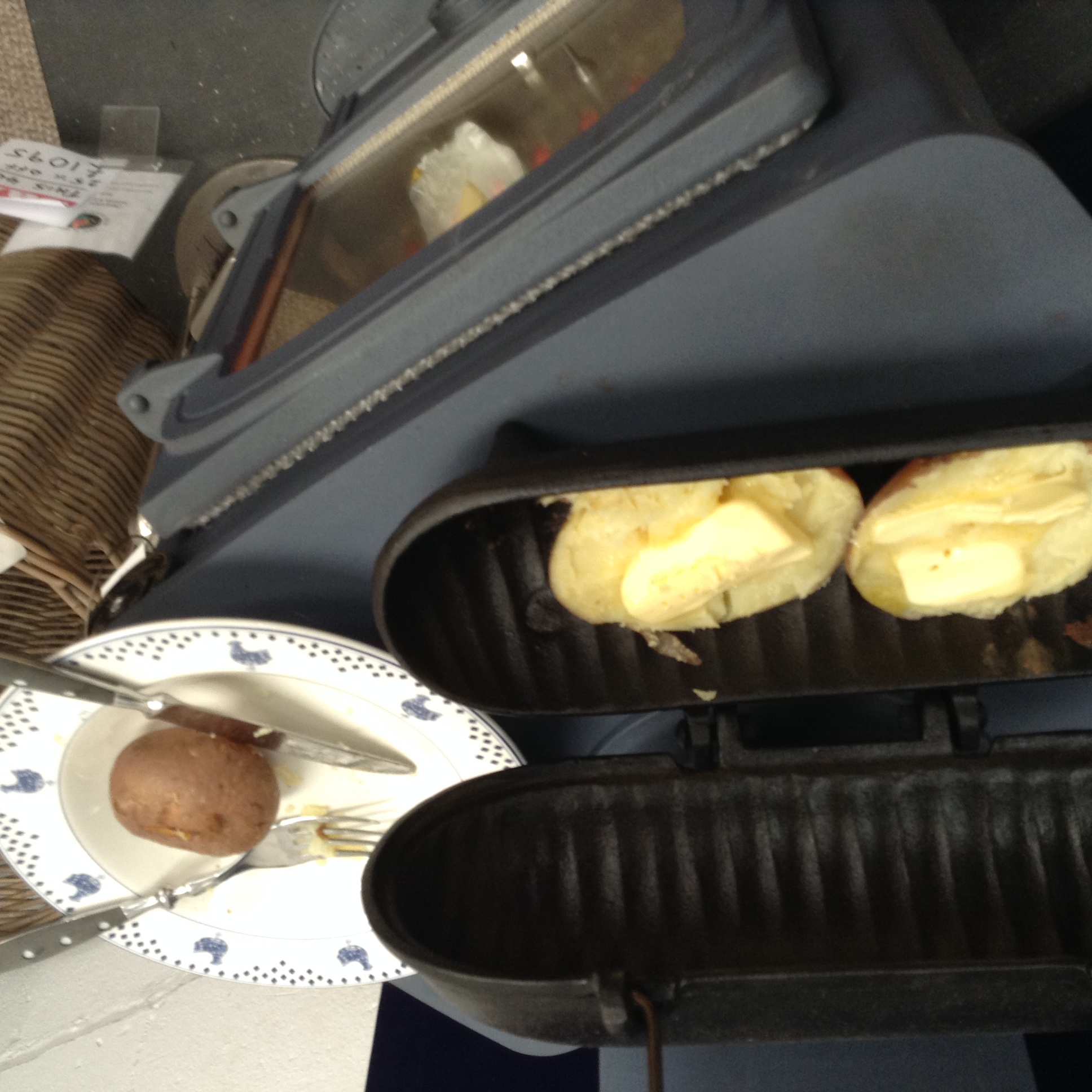 Just prep your potatoes, pre-heat the potato cooker on your stove, and then pop the spuds inside. They'll be cooked in about 2-3 hours; 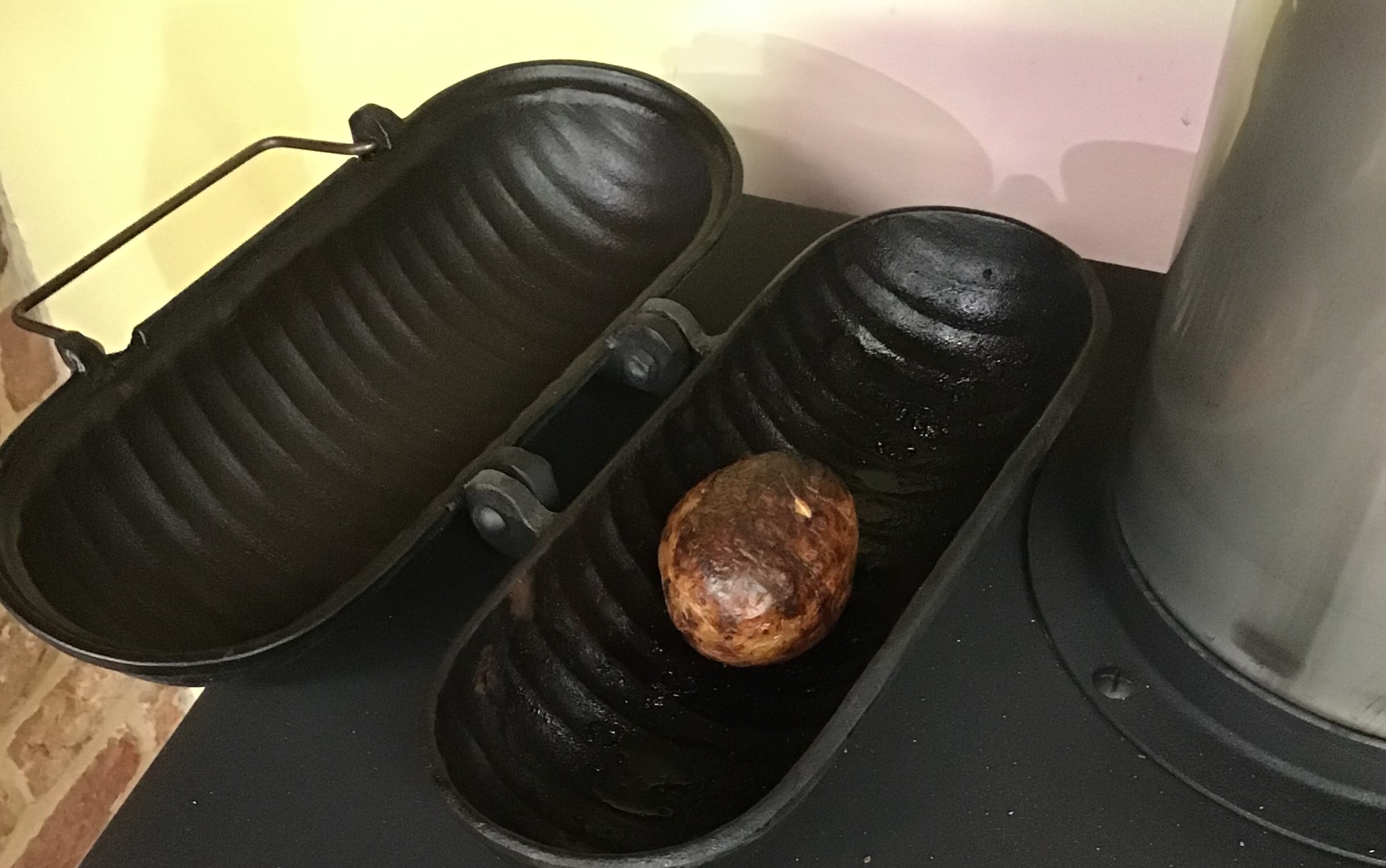 if you like the skin crispy, you can open the lid towards the end of cooking to allow evaporation of excess steam. 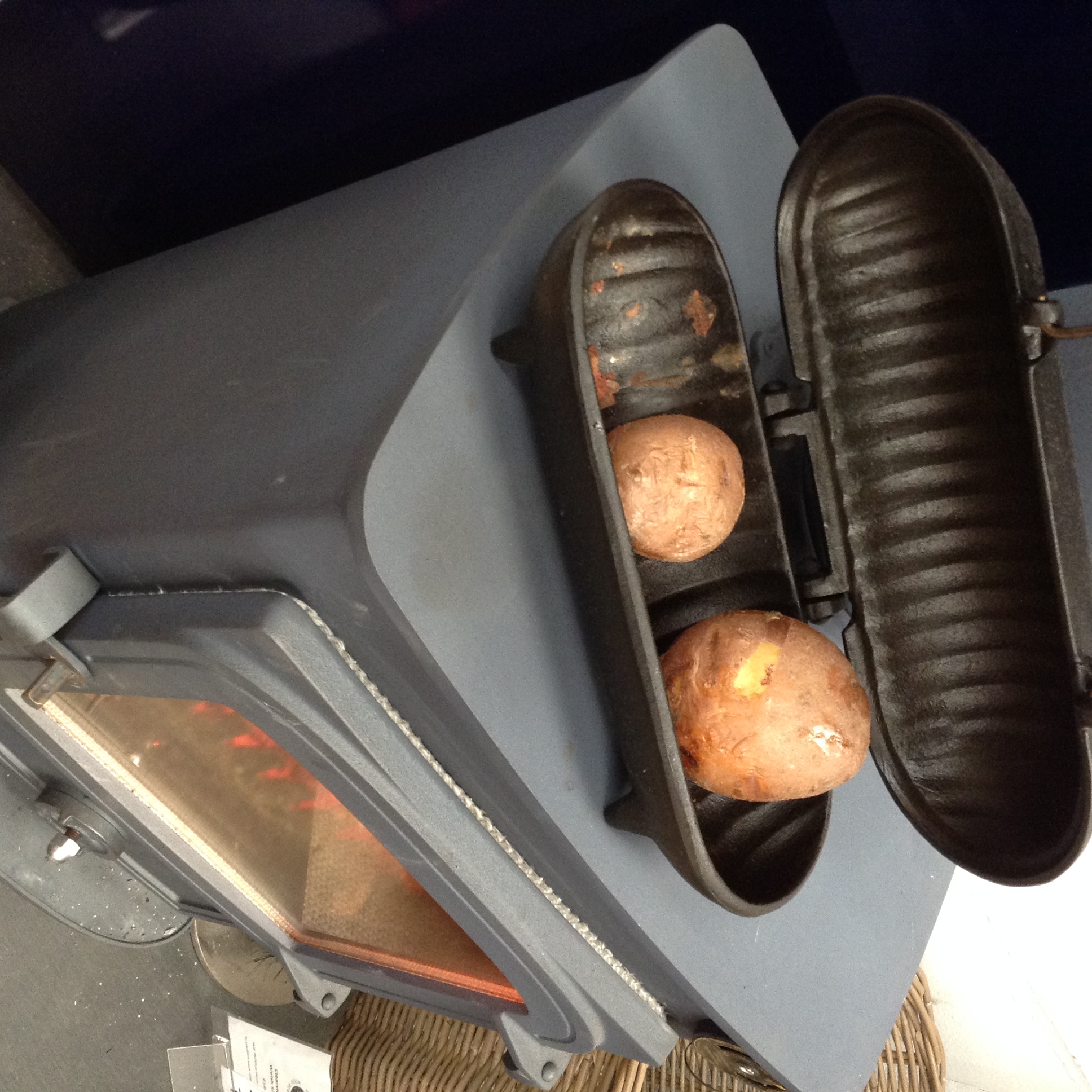 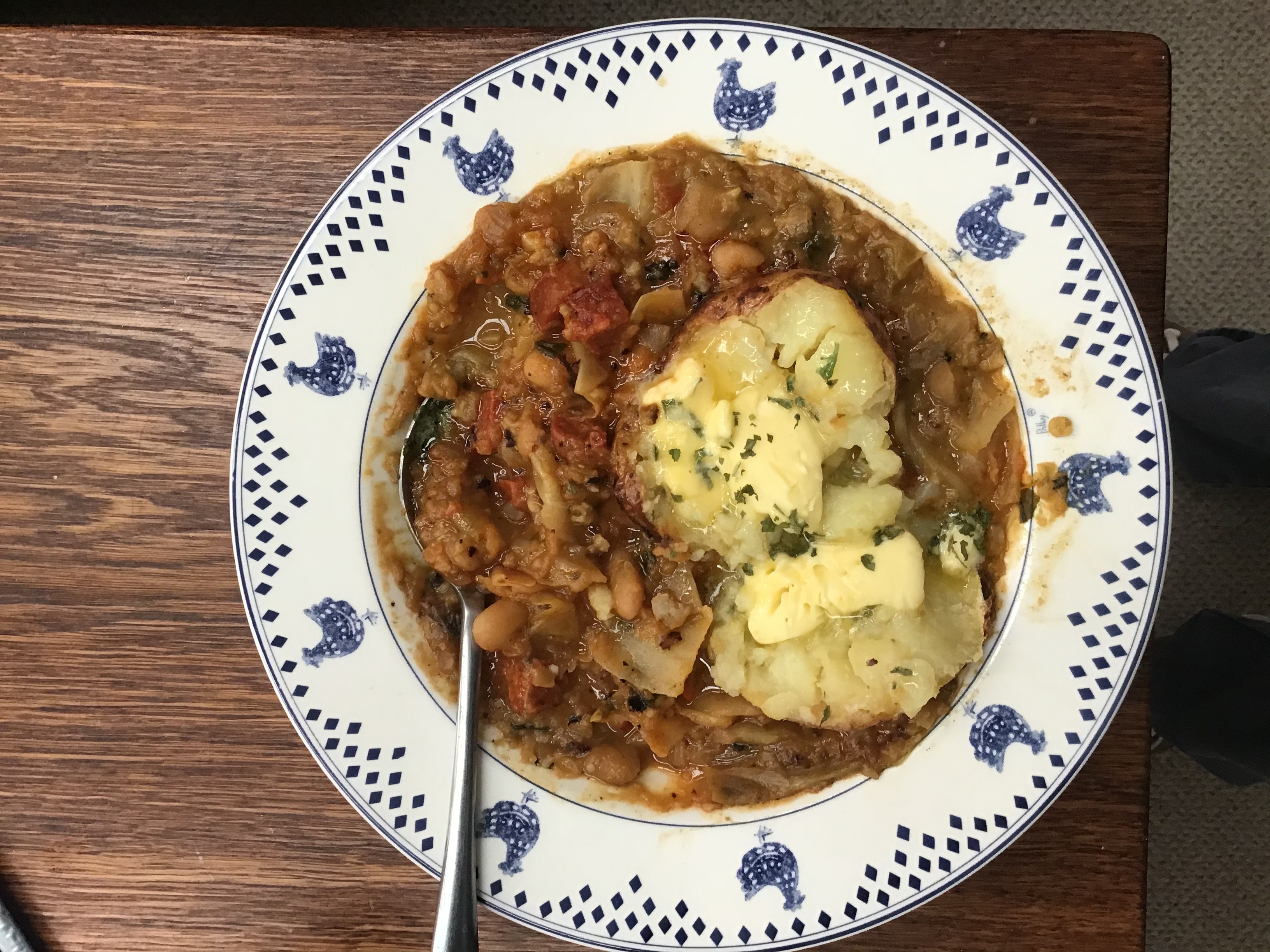 If you've not cooked with cast-iron before, it's worth acquainting yourself with the notion of 'seasoning' - nothing to do with salt and pepper, but with the judicious oiling and baking of your cookware - there's a good intro here.

Effective seasoning will give your cast-iron surface protection, reducing adhesion of food and preventing rust.

The panini press works in the same way, requiring pre-heating on the stove top. 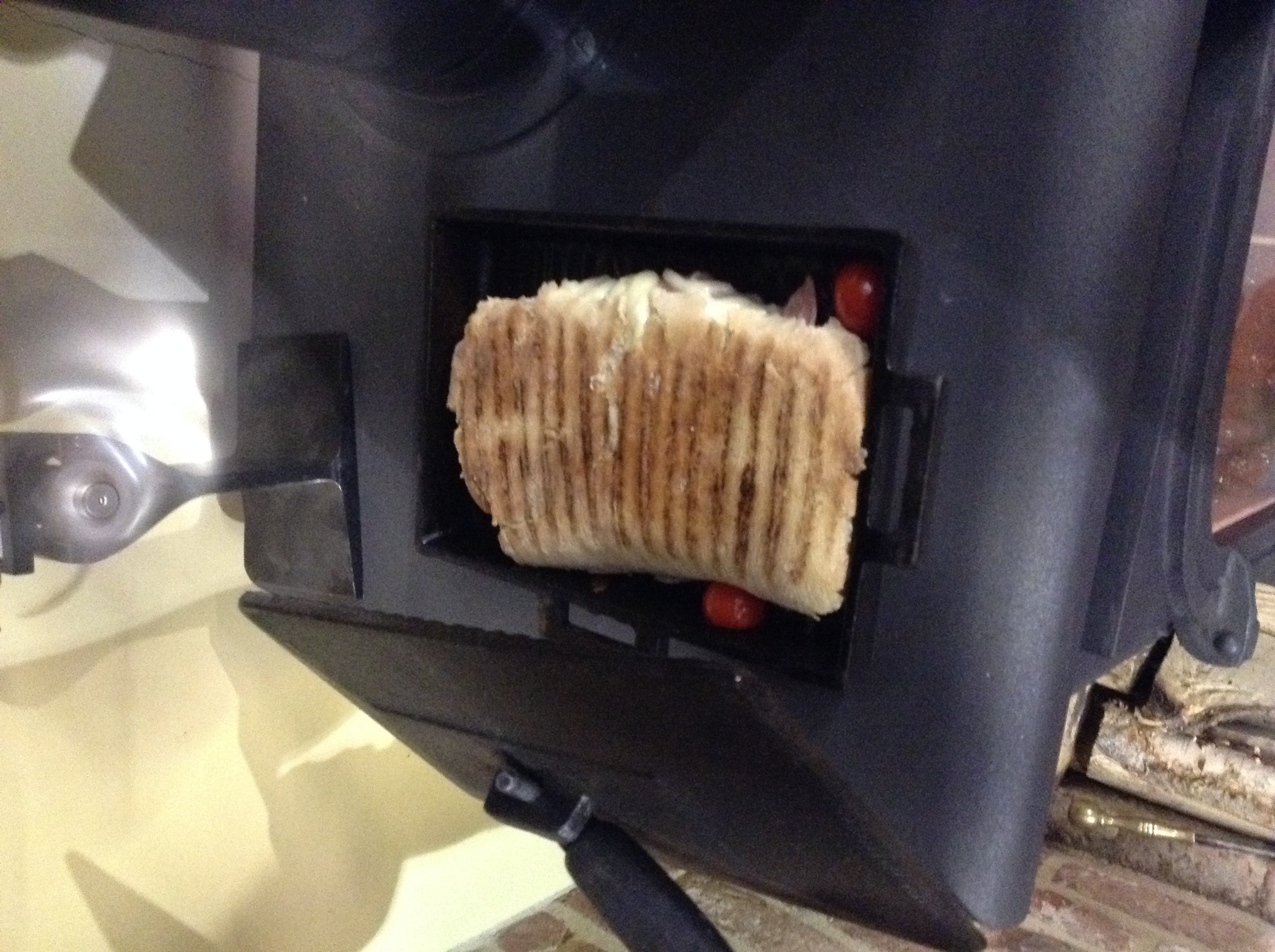 Assemble your panini or sandwich, place on the griddled base and set the lid down on top. 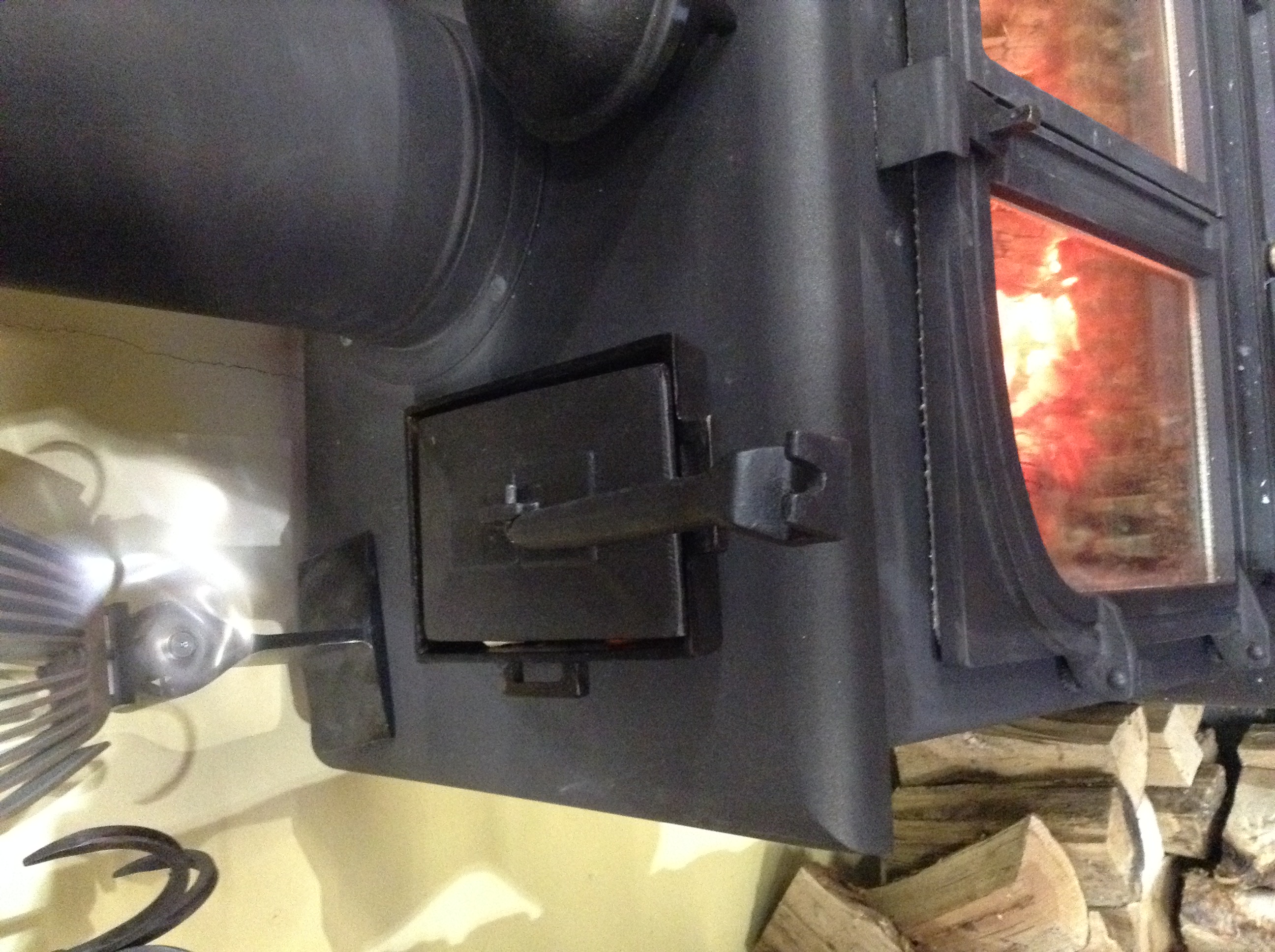 Cooking takes ten to twenty minutes, depending on the temperature of your stove, and gives you lovely crisp edges to the bread and melting fillings. Cheese and ham panini with a few tomatoes on the side: 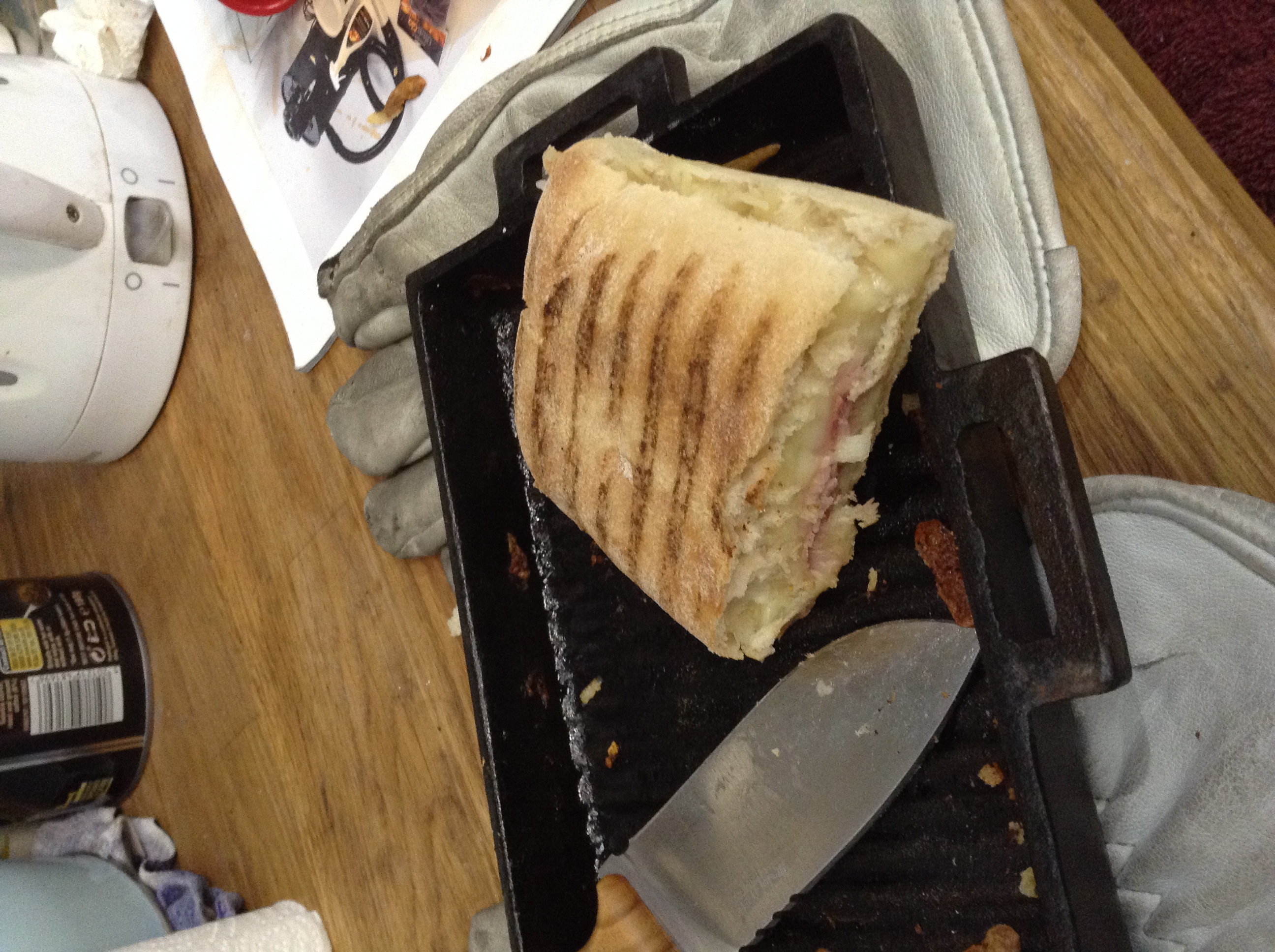 Or toast the bread first, then cook the steak (see below) for a steak sandwich: 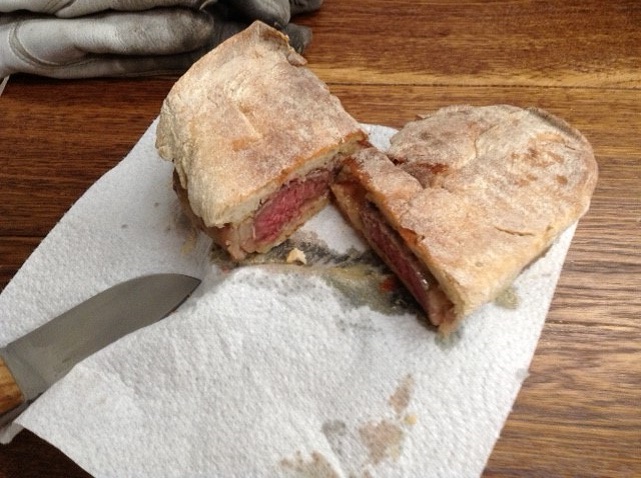 The handle supplied with the panini press is reversible, allowing you to lift either the lid or the press itself without resorting to gloves.

Last Easter we tried out hot cross buns in the panini press, 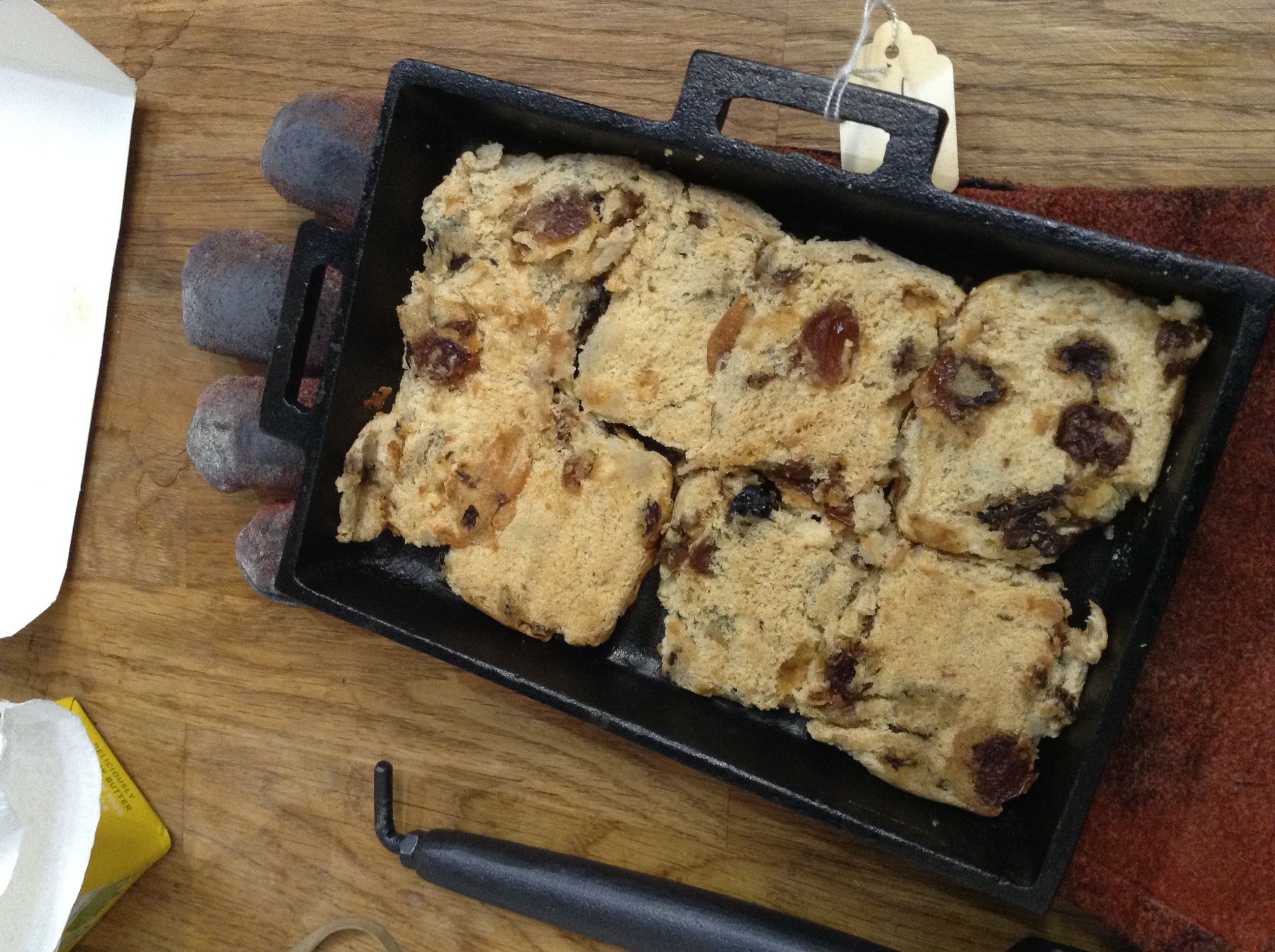 but in retrospect, probably should not have used the lid, as they came out rather more steamed than griddled, still delicious but lacking that element of carbonisation that elevates them to heavenliness. 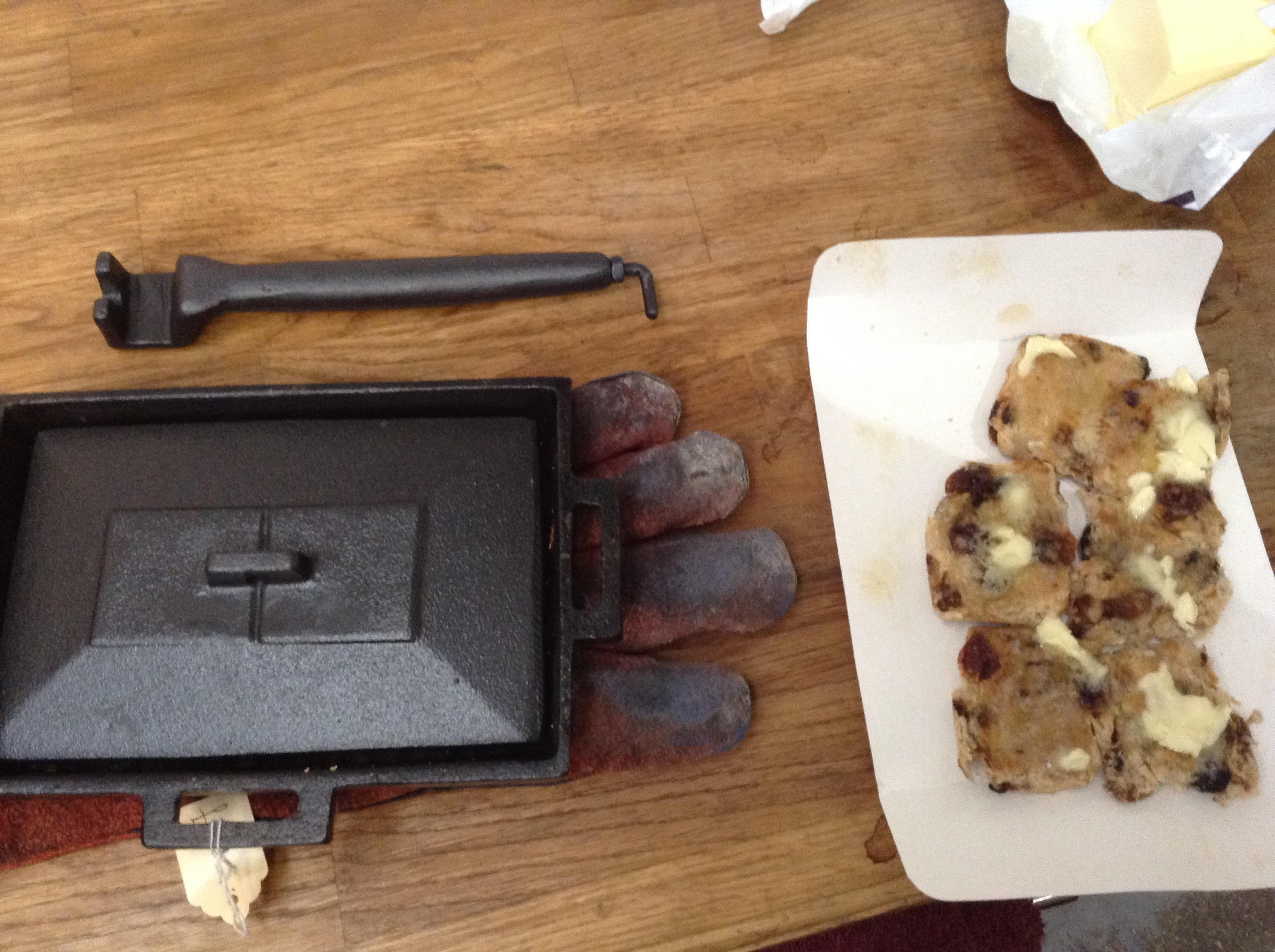 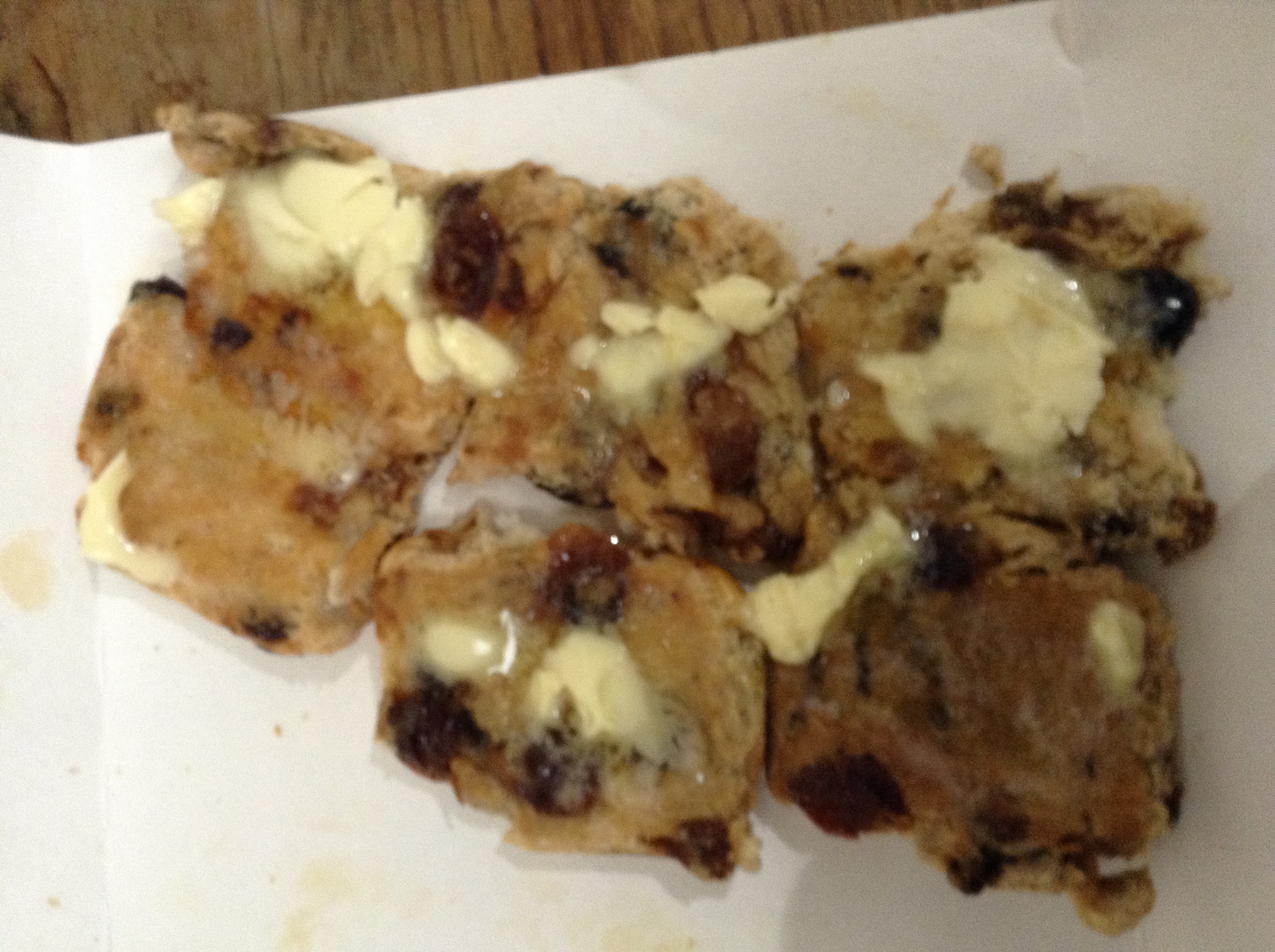 in this instance, we had better results using the oven of our Chilli Penguin 88,heated to about 250C, which gave us cracking results: 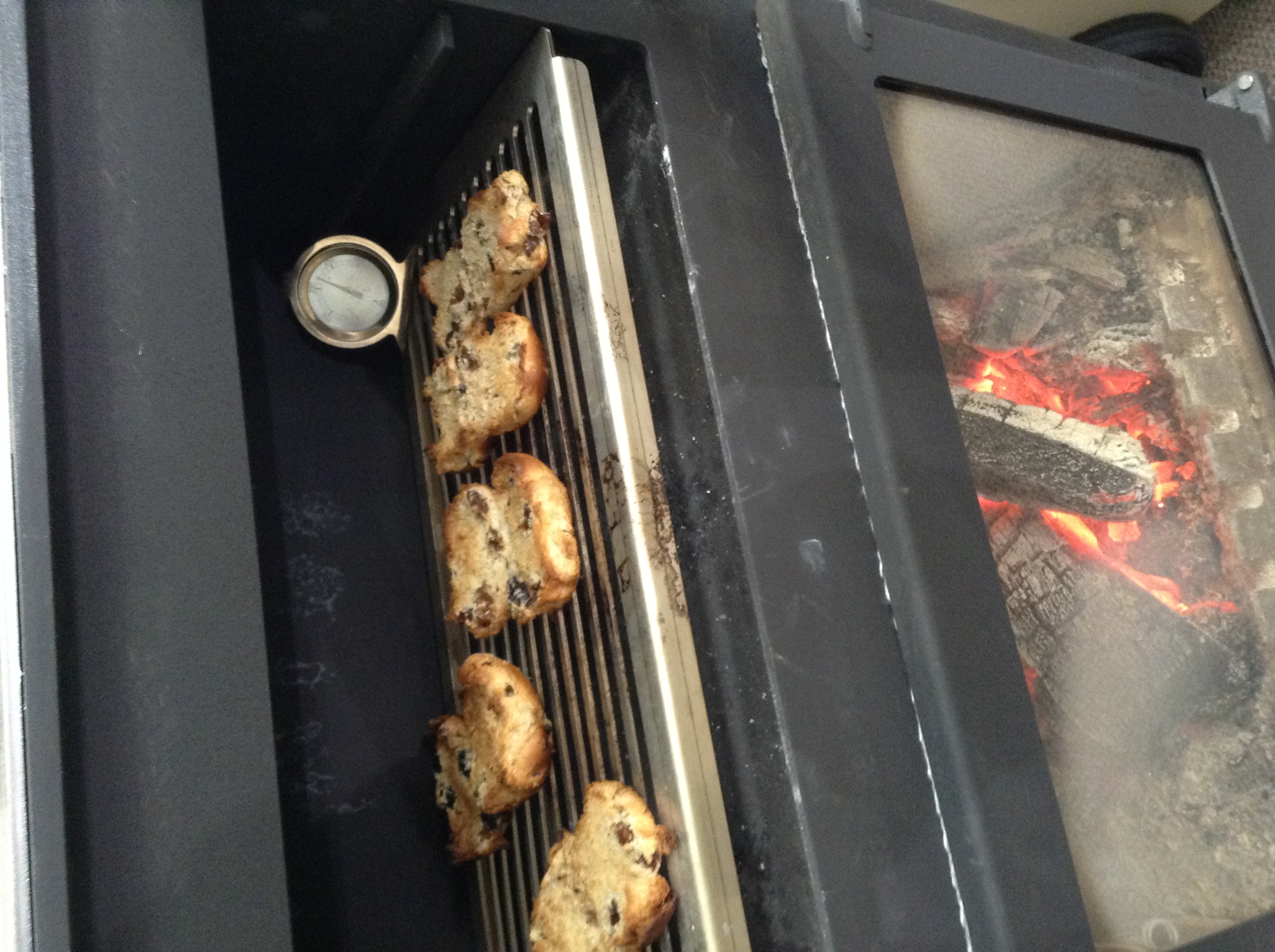 As the promotional images show, you can cook meat in the panini press too, using it as a griddle: sausages, bacon, mushrooms or whatever will slow cook on top of the stove, but if you are wanting to fast-cook thicker cuts of meat, we would recommend actually putting the panini press base into the stove itself. 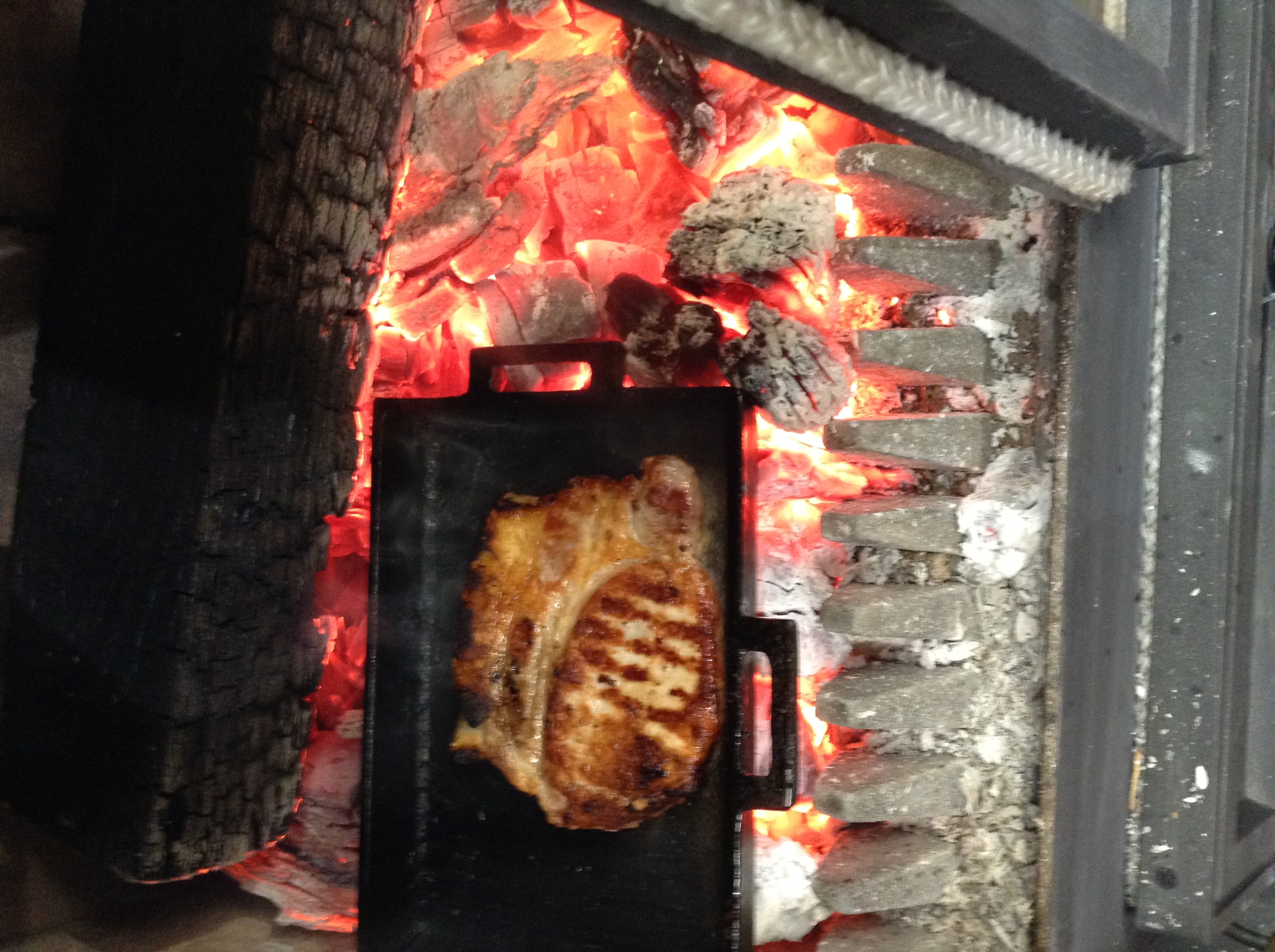 Pre-heat the press on top of your hot stove while you wait for a good bed of embers to get established, then pop your chop or steak into it, and, using the long handle, place it gently on the coals and close the stove door.

The massive blast of heat will cook a thick port chop in about three minutes, and a steak to rare-ness in about two. Keep a fork handy to flip it half-way through cooking, and keep a close eye on it. You'll see the Maillard reaction happening like an accelerated film, the fat crinkling, browning and popping, layering that perfect intensity of flavour onto the surface of the meat.

Timing is essential, because at the kinds of heat you're cooking at, a minute or two too long will give you a scorched piece of leather, and be vigilant; in our experience, after about four minutes, the surface of the meat will actually ignite, charring it unpleasantly.

Layer some newspaper over the hearth to prevent spitting fat spotting your slate when you remove the press from the fire. Fork the meat promptly off the press to prevent it over-cooking, rest it for a couple of minutes, then chow down (here with red lentils, chickpeas and tomato.) 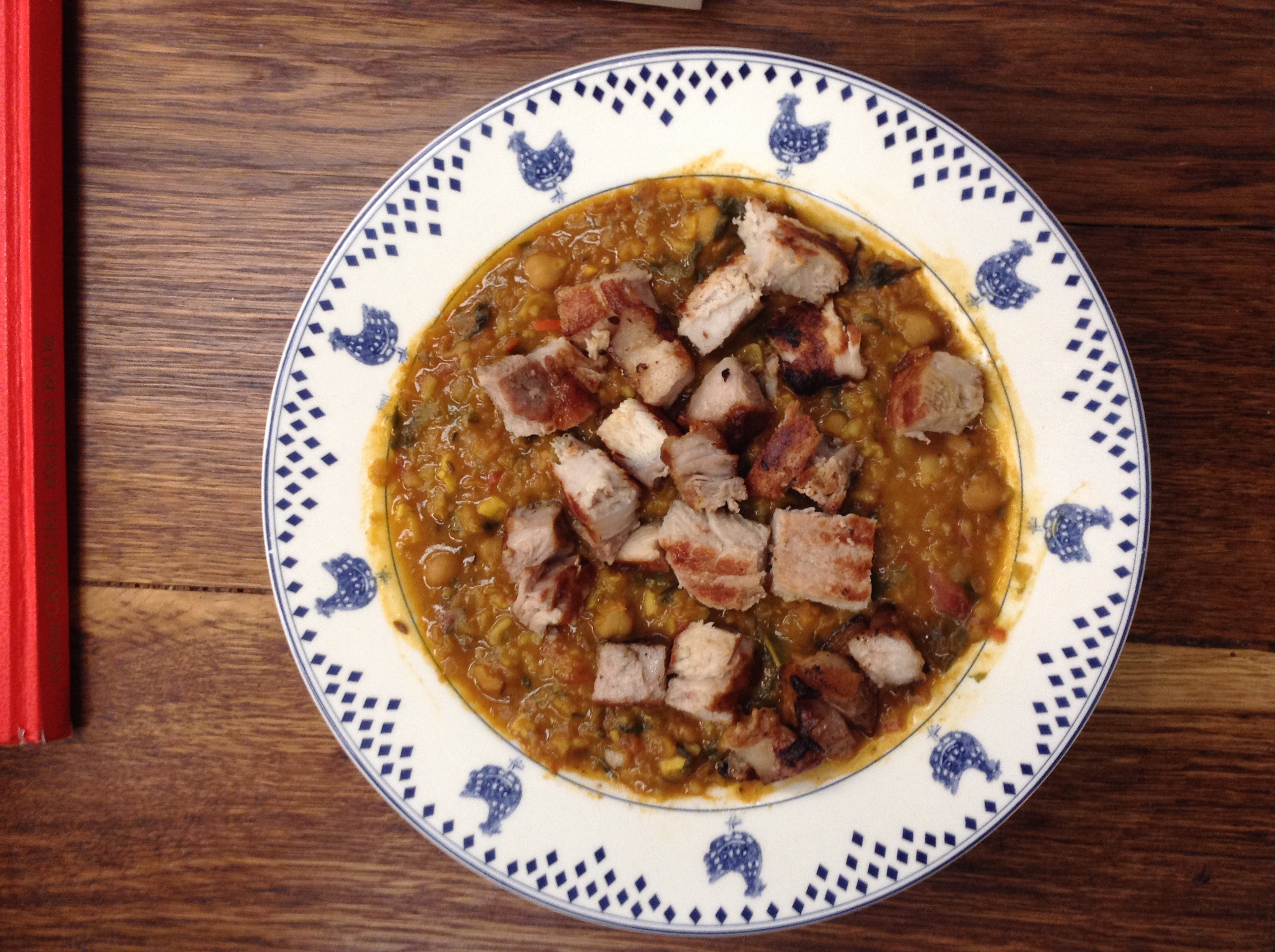 The potato cookers also will cook many combinations of ingredients. Here's one started with chopped potatoes: After half an hour: and plated, with coriander: At the time of writing, the large potato cooker retails at £40, the small potato cooker and panini press at £30; excellent value for three extremely versatile vessels for revolutionising your stove-top cooking arsenal.